Shop By Model Shop By Category Since 1974, we've had one goal: Innovate and inspire to improve riders' lives.

Innovate or Die. Three words behind every design decision we make.

Bikes are part of a greater culture with tremendous stories. This is where you'll find them.

We recognize that the decisions we make have social and environmental impacts and that we are responsible for minimizing them.

The Specialized Foundation uses cycling as a tool for children to achieve academic, health, and social success.

Since 1974, we've had one goal: Innovate and inspire to improve riders' lives.

Innovate or Die. Three words behind every design decision we make.

Bikes are part of a greater culture with tremendous stories. This is where you'll find them.

We recognize that the decisions we make have social and environmental impacts and that we are responsible for minimizing them.

The Specialized Foundation uses cycling as a tool for children to achieve academic, health, and social success. 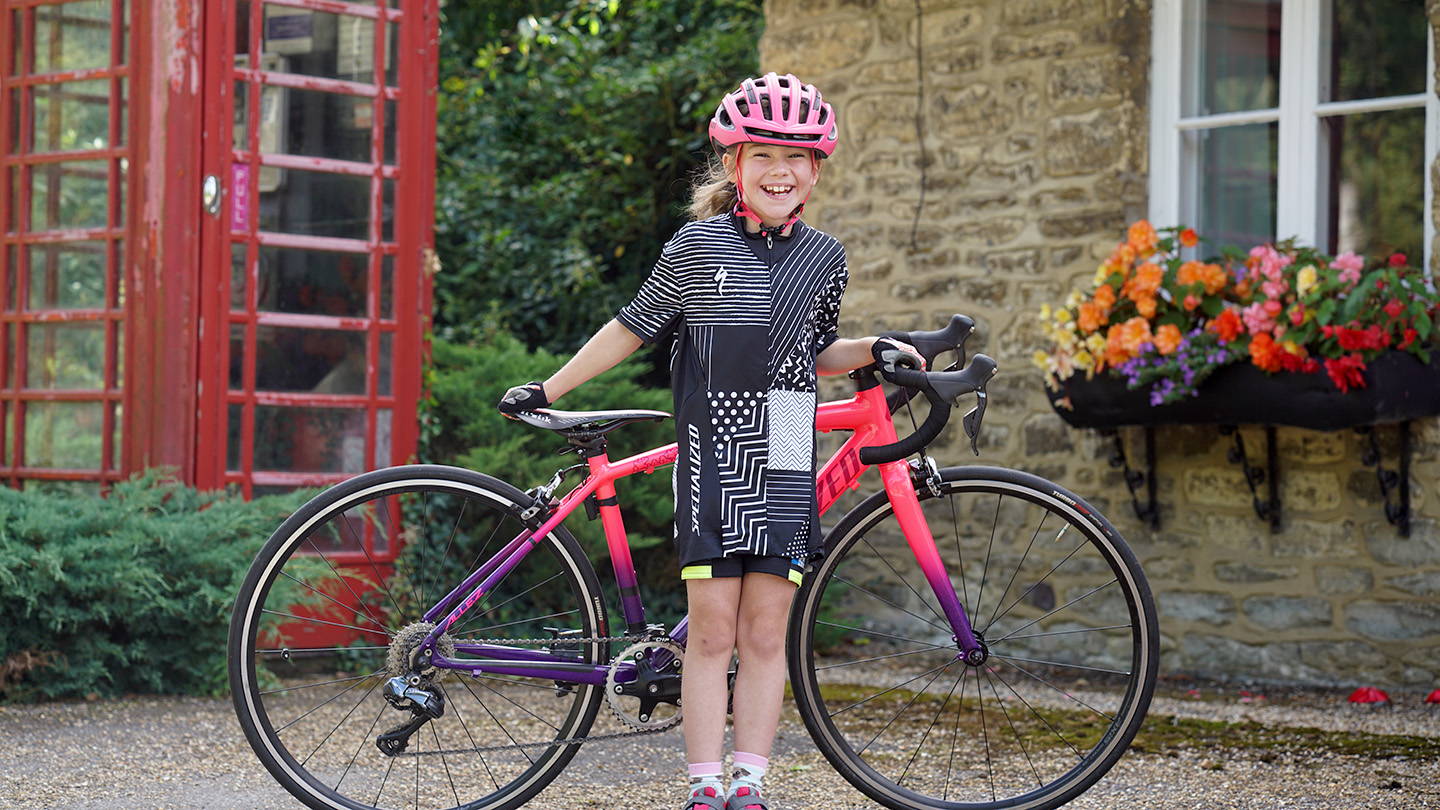 Ruby Isaac won't back down—she's got dreams to chase and energy to burn. Gutsy and fierce, she's determined to go as fast as she possibly can on two wheels, ride her way to the Olympics, and inspire other kids to get into cycling along the way. Dream big, Ruby—you've got this.

Her sunglasses are mirrored, reflecting a sea of Lycra-clad kids as they rally around the start corral with her. Absentmindedly, she pushes the white frames up and tighter to her face, wedging them in securely under her pink helmet. For a brief moment, she chews at the corner of her lip and glances around. She's waiting to sign in—to take her pink, gummy-bear decaled bike through the gear check—and get this party started. It's Stage One of the European Junior Cycling Tour in Assen, Netherlands, and nine-year-old Ruby Isaac is about to throw down in the Individual Time Trial.

"I like my bike pink. It matches my room," she says, smiling. Looking around, she adds: "And my TV. And my bedsheets." Ruby Isaac's bedroom is pink. Insanely pink. We are bathing in it, which is just about the definition of heaven for Ruby because it's her favorite color in the whole wide world.

Ruby climbs the ladder to stand on her bed and begins a tour, calling out all her treasures and flitting from keepsake to keepsake like a pony-tailed hummingbird as she does so. Stuffed animals, toys, and dolls are introduced. The character of a favorite book—Horrid Henry—is described in great detail. She shifts from foot-to-foot in excitement as she talks, and it's all standard nine-year-old bedroom fare until you get to the cycling memorabilia.

Just inside the doorway of her room hangs a giant painting of one of her British cycling idols, Laura Kenny; there are trophies and medallions from Ruby's races displayed on a window sill; and then there are her "special" jerseys. There's the Luxemburg National Champion's kit, given to her by Boels-Dolmans's Christine Majerus. (Christine was Ruby's first interview as Race Reporter Ruby at the Tour of California in 2017.) And then there's one Helen Wyman gave her. She lays it out. "It was a women's small, but it was too big. Some lady made it fit me better," she says.

"What does it feel like when you wear it?"

"It makes me feel, like, really fast," she says, smiling shyly. 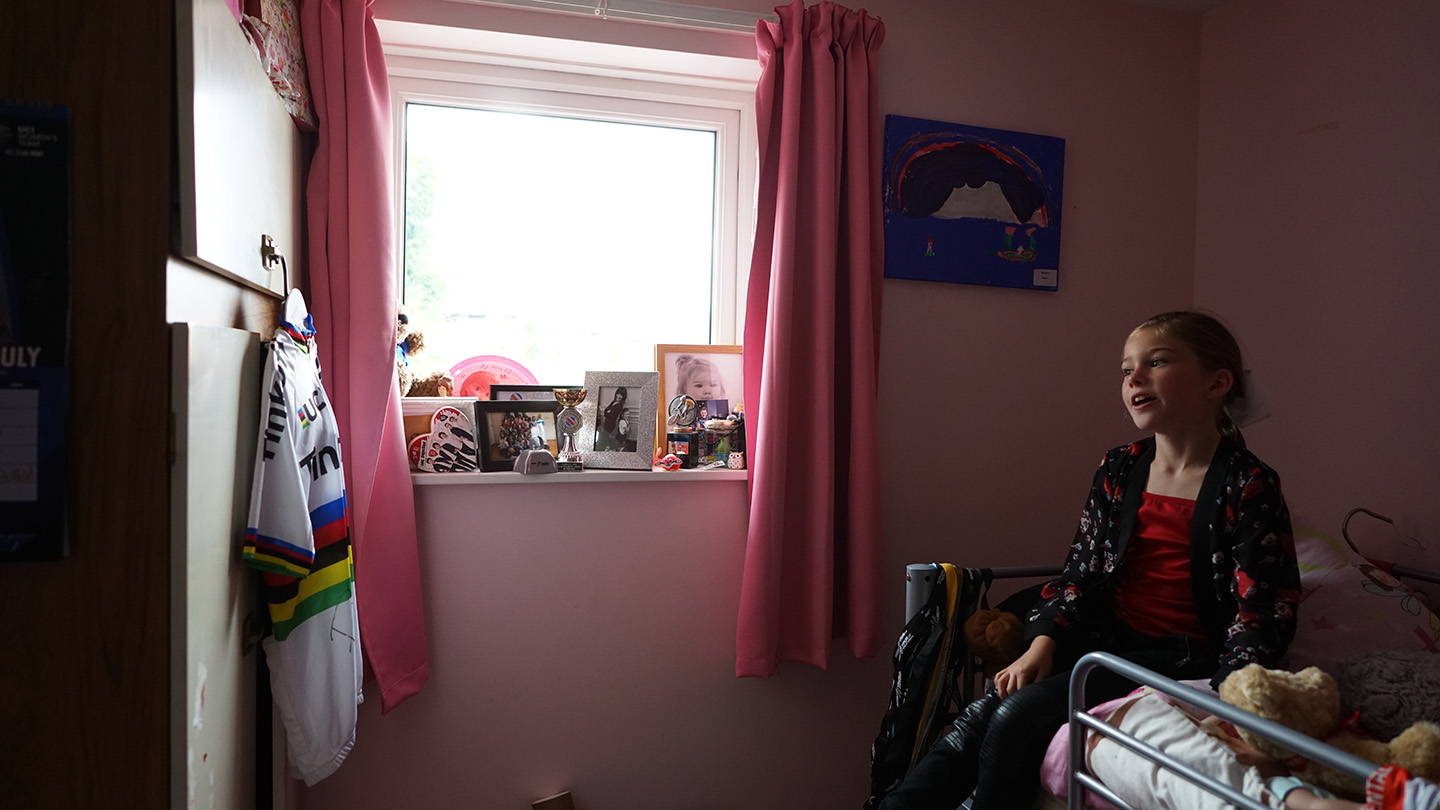 Spying something across the room, Ruby climbs down from the bed to point out the rainbow-striped elephant in the room—Peter Sagan's World Championship jersey. Grabbing it down from the hook, she holds the jersey up against her tiny frame, as though modeling a dress. It reaches down past her knees.

"Peter signed it here," she says, pointing out Sagan's scrawl on the white material. "And then, at the bottom, he put ‘To Ruby' and that is really nice." Holding it at arm's length to gaze at it for a moment, she stretches on tip-toes to hang it back up.

We like our girls to dream big. Ruby—she doesn't do small scale.

Ruby Isaac won't back down—she's got dreams to chase and energy to burn. Gutsy and fierce, she's determined to go as fast as she possibly can on two wheels, ride her way to the Olympics, and inspire other kids to get into cycling along the way. Dream big, Ruby—you've got this. 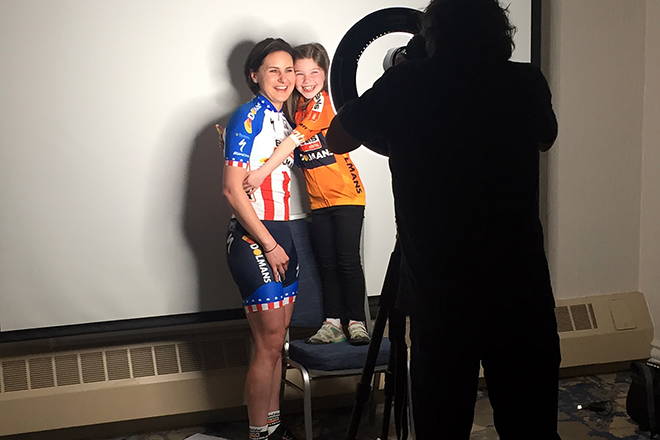 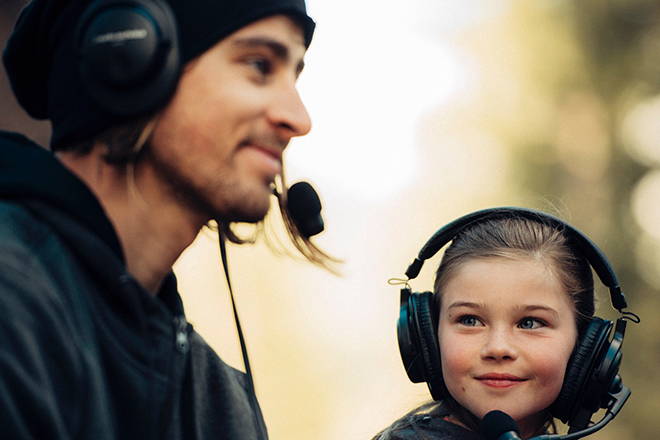 She steps up to the table and leans over to sign in the official start list at Assen. She looks up at the man with the accent, then down to where he's pointing for her to sign her name. One foot toes the heel of the other as she leans over the sheet of paper. She signs. A man takes her bike and she walks alongside him as he runs it through the bike check. She's looking up now awaiting further instructions from the adult. There's the garble of a language not her own, then a smattering of English to direct her where to go. She grabs her bike and joins the line that leads to the elevated start chute for the Time Trial.

She's never ridden down a start ramp before, and if she's worried about falling as she's let out of it, she's not letting it show. Nick, her dad, mentions that she's a little unsure about it. But Ruby Isaac has a simple code: You just have to try. Really hard. And you just keep on trying. 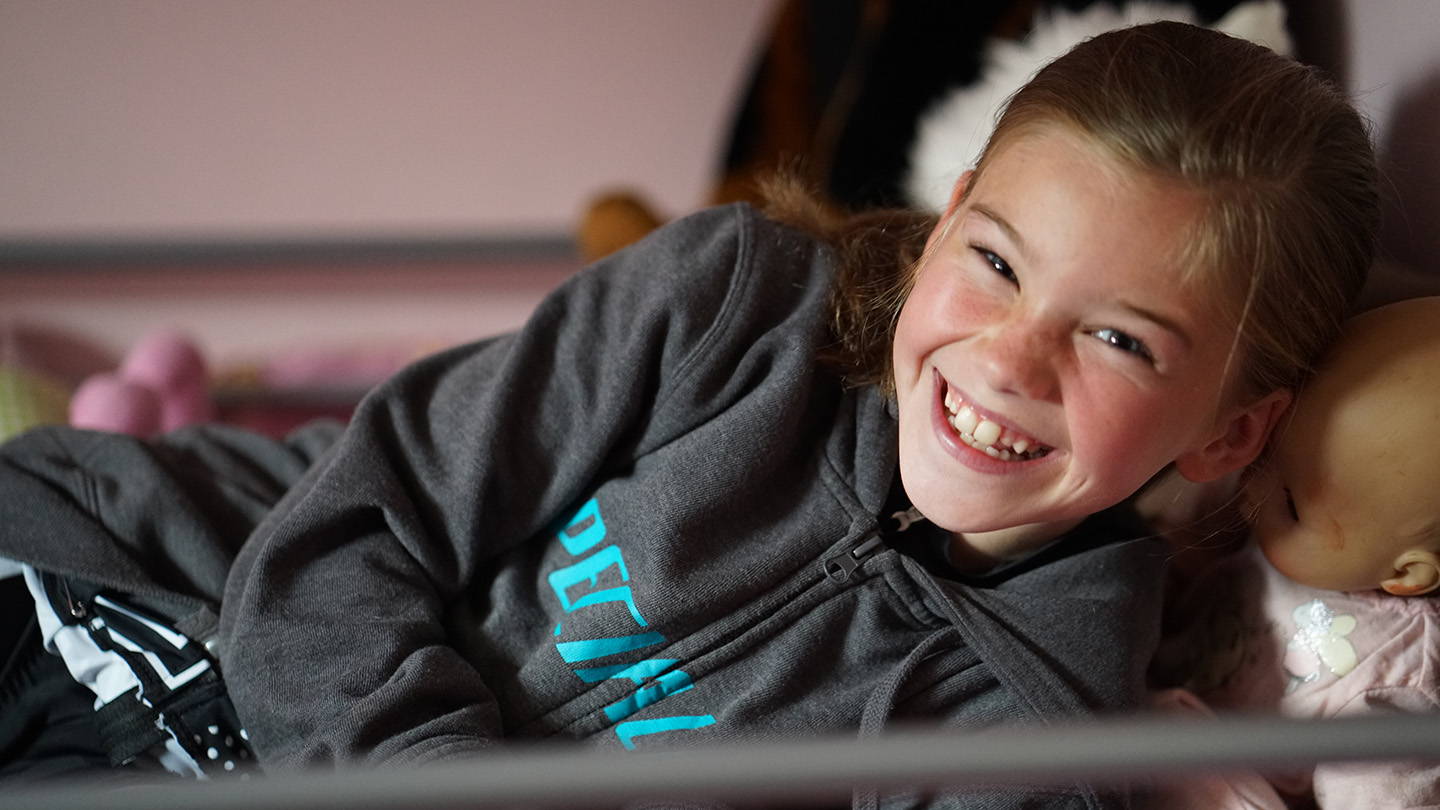 Ruby Isaac kneels on the floor of her bedroom and pulls out the bag she'll be taking to the Netherlands. It's prepped for six days of racing—the most she'll have ever done in one week. The bag is jammed with kits, her helmet, hats, and so many pairs of sunglasses you'd think she was opening a pop-up store. Pulling out her headphones, she tries to remember the name of her favorite "pump up song" before saying it might be called "Raw Stamina" or something.

"I like listening to 'Stamina,' because when I listen to it, it says how great you are and that you've got stamina. All the songs on here are songs that make me ready for races. […] I'm taking it to Holland so when I go in my room, I can listen on my iPod."

There's a line in the song (which we find out is actually called "Greatest" by Sia), that talks about not giving up. We ask Ruby what she thinks it means—to not give up. She pauses and thinks as she repacks her bag in readiness for the trip.

"Just…, if in one race you're near the back," she says, "Don't give up and say you won't do it. Your next race sometime, aim for the front if you can. So just don't give up."

She zips the bag closed. She is ready to go. 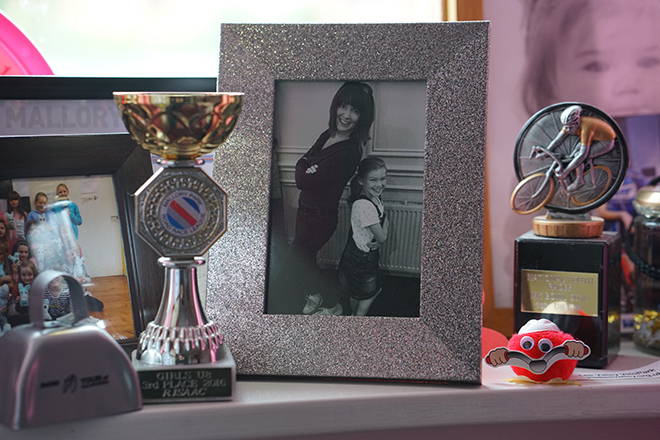 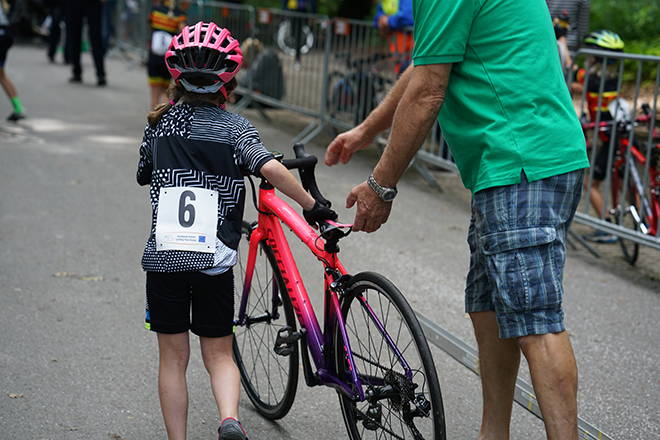 Every 30 seconds, Ruby moves one spot up the line. Her name is now up on the digital display. In front and behind her are other kids, also nervously awaiting their time slot. The range in sizes of these kids is extremely wide, with Ruby one of the smallest. But her size doesn't seem to affect her mindset at all. Much like Han Solo, we suspect you should never tell her the odds. When you have guts, what good are odds? That's just something people who doubt themselves use as an excuse.

"What's it like to be small?" we'd asked, just days prior. 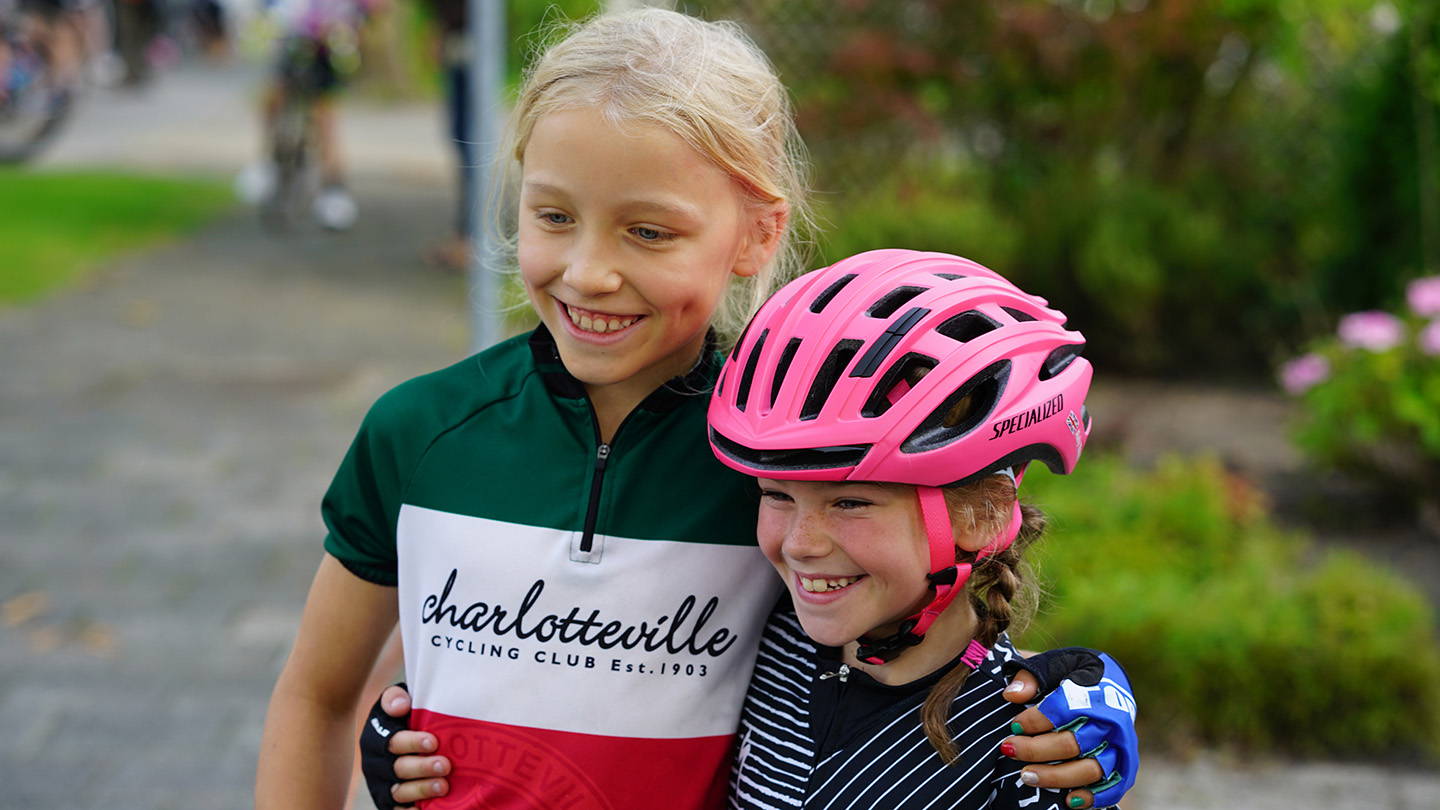 WHEN I'M IN A RACE—WHEN I SPRINT—I SOMETIMES PULL A FIERCE FACE.

She grits her teeth. Screws up her nose and fixes her eyes in a steely gaze. "That's the face that I pull when I'm going really fast," she says, her demeanor hinting at a growl.

We all have a fierce face—some of us have just put it in storage. But after 10 minutes with this kid you can feel yourself cracking the door to your "Girl Power!" attic and brushing the dust off yours. Her attitude is infectious. Ruby knows that whipping out her fierce face will help her channel her confidence and that equates to more speed, determination, and straight-up guts. It's like a secret weapon—a trump card she can throw on the race table to win the hand. And victory can be an actual win, a finish, or sometimes even both.

"My first ever race," she says, "I was on my little Apollo bike, which is orange, and then I remember it [the course] was just like a little circle but there's a hill you had to go up. And I remember I came last. I was, like, trying really hard and I was just crying. But it was just amazing that I finished that race, yeah?

Yeah, double yeah! It's the kind of story where you just want to crush her to you—she's so proud of herself and you of her. But then it gets better. "And then I went back a year after, and I won it."

Some call them Dreams. Some call what they seek Destiny. But for Ruby, it seems like it's really just about getting out there and having a go and just believing in yourself. Sure, she dreams of going to the Olympics one day, but it's all about the possibility of future, now. It's about trying new things and seeing if they fit; having heroes and believing in them; and above all else, just doing the very best you can.

"I like riding bikes because it's really fun. […] It's not just all about the racing—even if you want to race, it's just not all about that. It's just sometimes having fun as well. So, that's why I like it—because you can have fun." 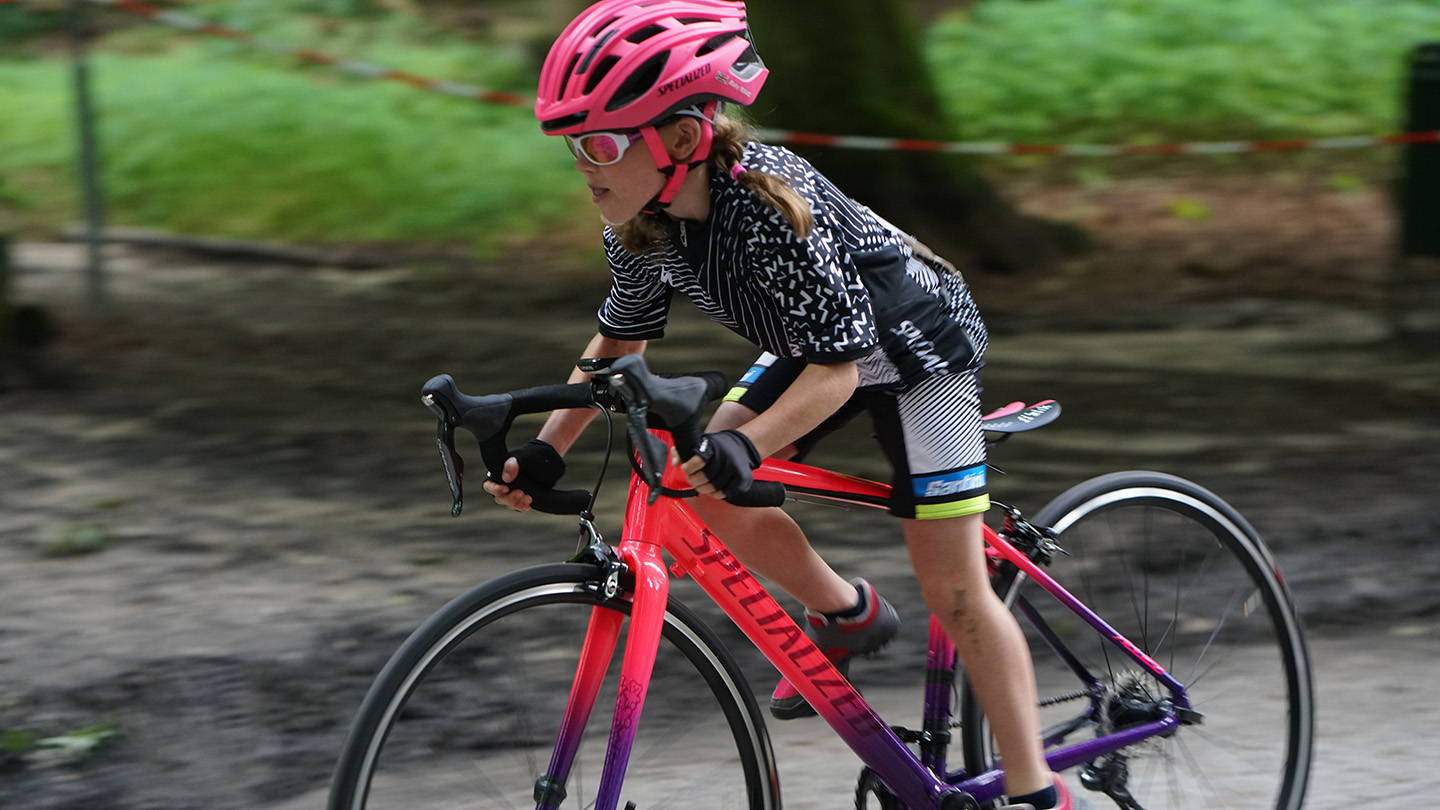 The moment is finally here. Ruby is in the start chute of the ITT at the European Junior Cycling Tour. Her hands are on the bars, and she shifts slightly on the pedals as the official holds her saddle in readiness. To let go. To fly. To just go as hard as she humanly can. We can see the hint of a "Fierce Face" coming on as the clock counts down. A hand appears in front of her—five fingers splayed out to count down the last, critical seconds.

On One, the single finger waves her forward and Ruby Isaac rolls down the ramp and is gone. One gutsy girl on the road to becoming one heck of a gutsy woman. 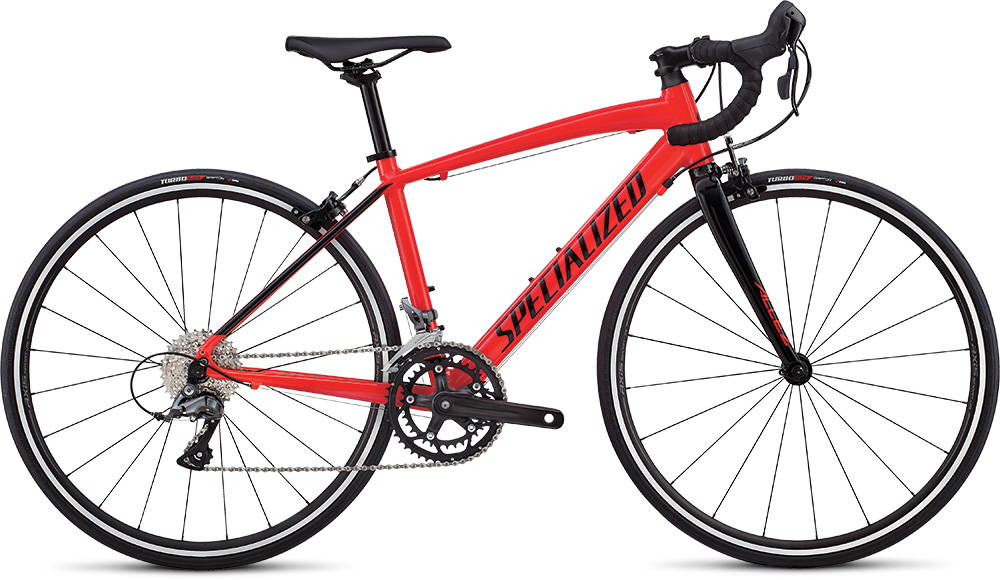